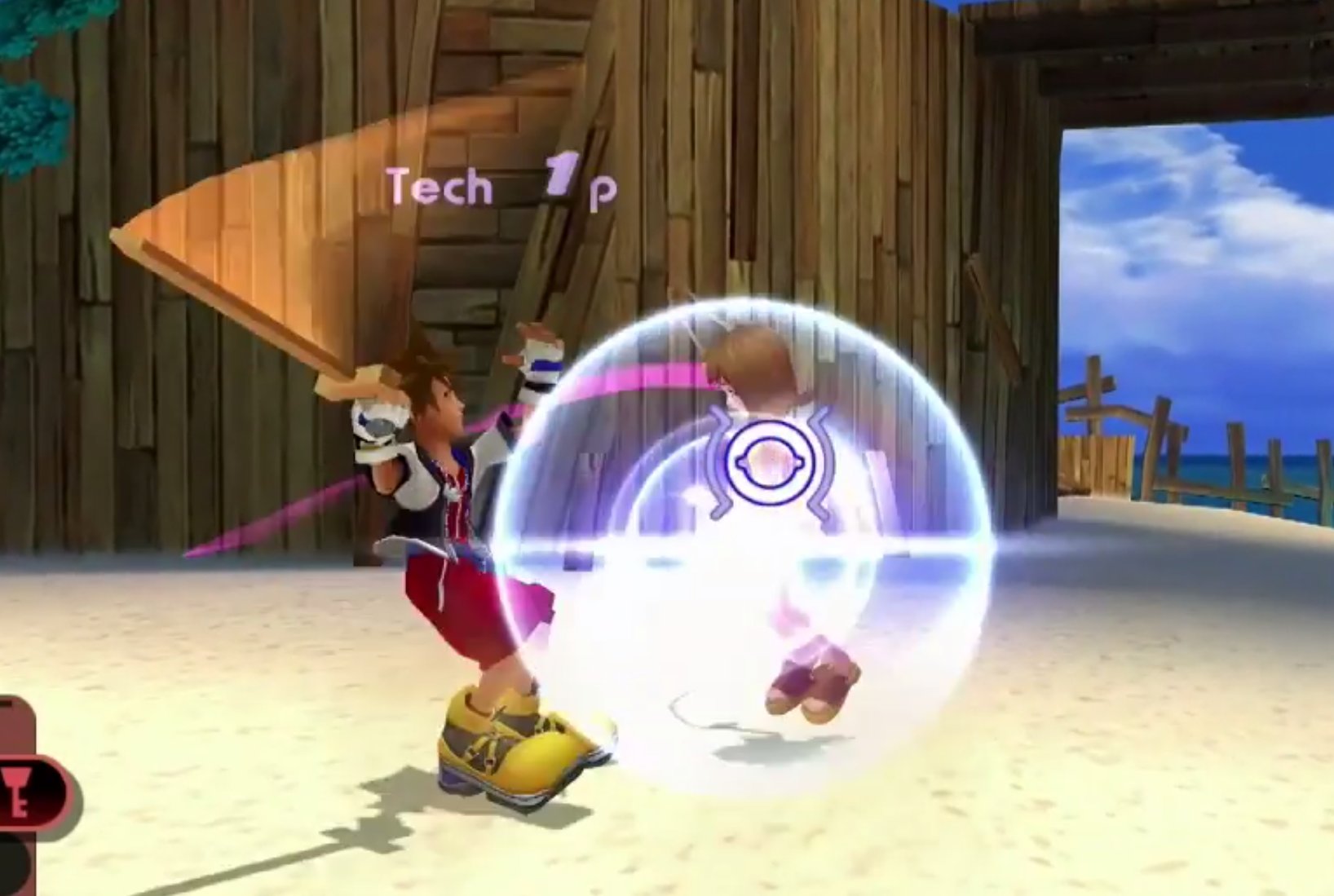 In the original Kingdom Hearts, Tech Points were a feature in combat that allowed players to get extra experience for taking specific actions in battle. Tech points are awarded when the player exploits an enemy’s weakness, parries an enemy attack with an attack of their own, or uses an enemy’s attack against themselves

Tech Point was a mechanic that added small elements of strategy to each battle, but how come no other Kingdom Hearts game used this system? Why was it such a useful feature and how could future games improve on it? Let’s discuss!

On the surface, Kingdom Hearts has a simple combat system. Goals for the player are simple – kill the enemy without dying. The game has an optimal strategy that makes it easy to win – attacking and curing when you need to. The developers made it simple on purpose so kids unfamiliar with RPGs would get into Kingdom Hearts because they loved Disney. But what about high-skilled players that wanted something more complex?

Players pursuing tech points will put themselves in riskier situations, such as relying on parrying or guarding instead of taking the easy way out and dodge rolling away from harm. In the Darkside boss battle, Sora gets a tech point each time he strikes the bosses head, which can be challenging to reach (climbing up his arm). Nothing is forcing players to do it, normal players can get by just fine without ever even noticing you could attack the head. But for players who want that extra challenge, going after Tech points makes the battle a little more challenging and a little more rewarding. 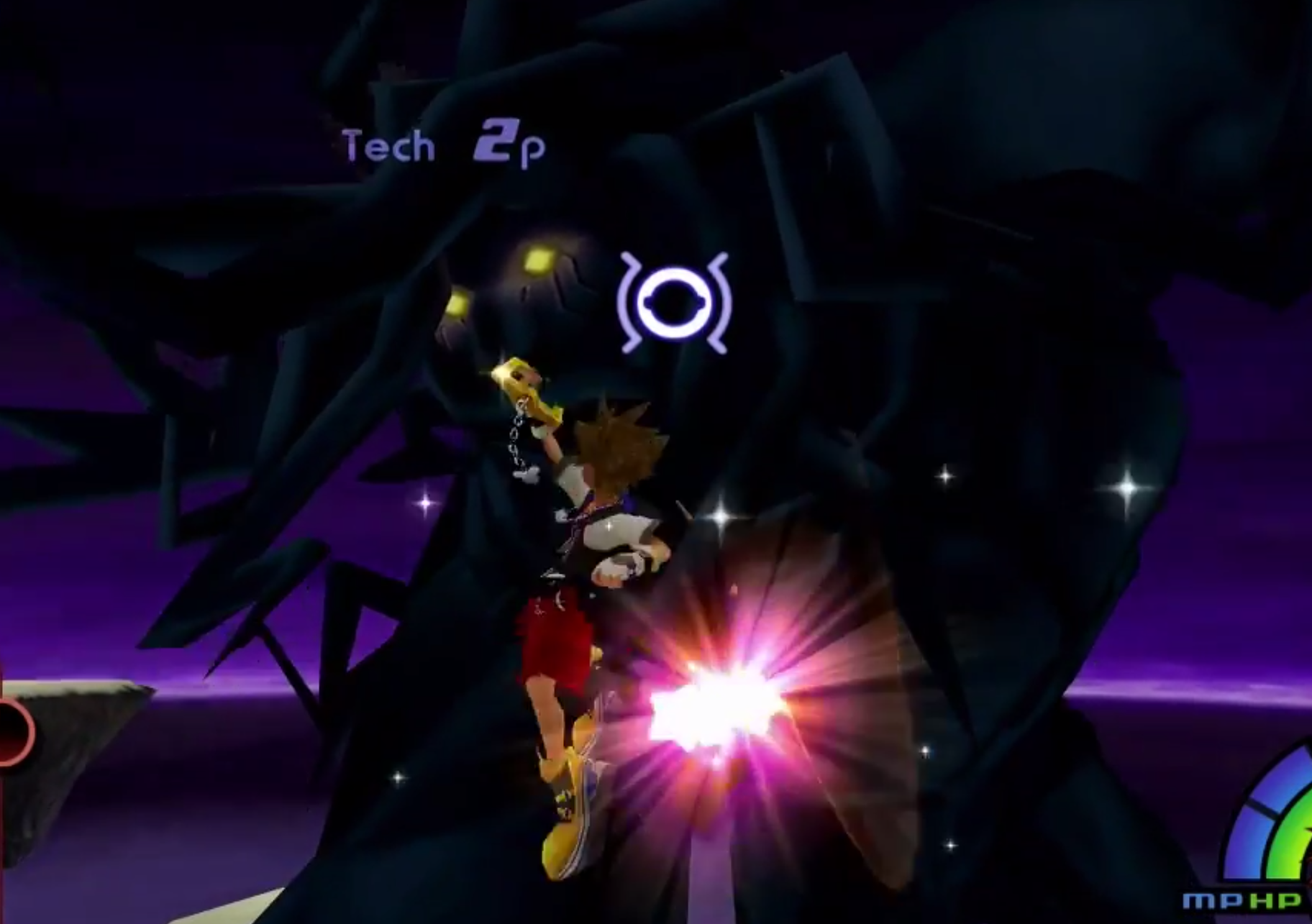 Tech points give people a reason to explore combat situations. It can be fun to figure out how to get Tech points for certain enemies, like stumbling on Darkside’s head and being rewarded for thinking outside the box with a Tech point. Another example could be reflecting Cerberus’s fireballs back at him. Players rewarded with tech points in the past by parrying attacks will be the ones to think reflecting a fireball and when they find it, it’s incredible!

Since players are exploring combat and playing in riskier situations, they are getting better at the game. Now, with there newfound skill, they can do more cool things in battle which reinforces their enjoyment of the game and provides more varied combat to keep the player in flow.

How could they be improved?

Tech points increasing combat exploration sounds great in theory, but in practice, the game doesn’t follow through with it as much as it could. It’s disappointing because Kingdom Hearts has fairly deep combat that players never have a reason to explore because Attack-Cure is such a dominant strategy, leading to people calling the game a hack-and-slash.

Summons and advanced magic are features that make the combat deeper as can be seen with speedrunners using these mechanics. Most novice players rarely ever use these mechanics because they don’t see the advantage of it, which is because they haven’t practiced it, which becomes a loop that causes people never to use it.

Tech points could’ve been one way for developers to reward playing with summons and advanced magic to help players learn how to use these mechanics. Unfortunately, the only non-mushroom advanced magic tech point is for using Gravity on a Yellow Opera, which the player won’t even have the first time they encounter them. Playing physically tends to yield more Tech points than magically, leading to people to focus even more on physical attacks and save magic for healing because the behavior is reinforced.

Overall, I don’t think it’s too much positive feedback. In a game like Kingdom Hearts, XP is a nice simple reward for Tech points and anything else might be strange enough for low-skilled players to not even care about. At least here, they have a reason to try to parry sometimes.

One consideration that could be an improvement: Synthesis items as rewards for Tech points. If I could go through the game and get all the synth items I need from bosses just for getting certain tech points, I’d be thrilled in the end game that I don’t have to deal with the random drops.

Why weren’t they used in future games?

It’s a shame that developers dropped Tech points from the series, but my question would be, “Does the series today really need it?” Let’s look based on the main advantages of Tech points:

Tech points in KH1 provided fun challenge layering helping multiple player types stay in flow. It may have helped players explore physical combat and get better at parrying and guarding but at the trade of advanced magic and summoning mechanics. In later KH games, developers replaced the challenge layering offered by Tech points with other means and may have struggled thinking of ways to use Tech points to encourage variation in combat.