In Zelda Breath of the Wild, ever wonder what order people usually complete the Divine Beast Dungeons? What about which boss was hardest? Well, I surveyed Reddit /r/zelda to find out.

This post is only 1/3 of the survey results. You can find more results from the survey here.

The following results are based on 428 responses from the Zelda subreddit.

These results were intriguing and also affected what peoples’ favorite quest was.

As you can see, Zora was the section people gravitated to first (84%). This matches what I expected for a variety of reasons:

The rest are in various orders. Goron leans slightly towards being the last because of how hard it is to climb Death Mountain.

Here you can see the full order that the surveyed players completed the game in:

Rito is the easiest boss. Gerudo’s is by far the hardest. Here are the averages:

We can drill into this data based on the order players complete the bosses. 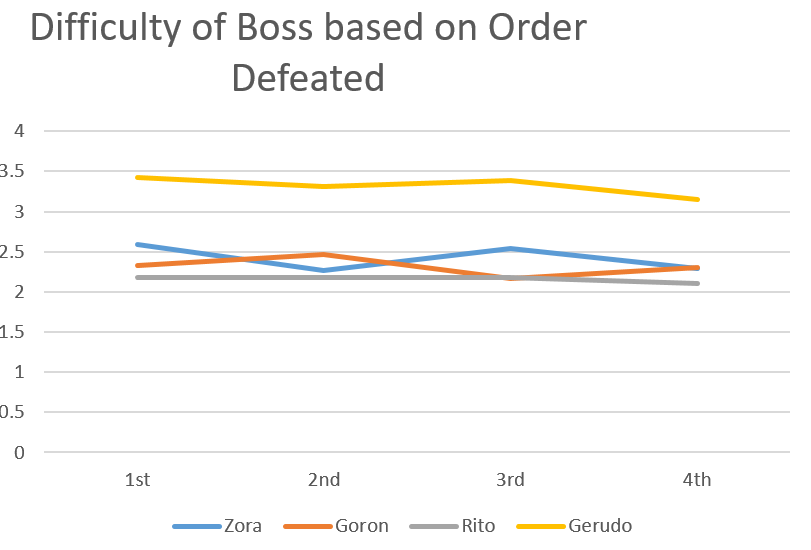 For the most part, the difficulty of the boss isn’t affected by the order you face it. The Gerudo boss is still by far the hardest, and the Rito boss tends to be the easiest. The Gerudo boss does tend to be easier as you go through the game, but it’s the only one that shows even a slight pattern like this.

Why do bosses seem to be the nearly the same difficulty no matter when you face them? Here’s what I think:

Why is the Gerudo boss so hard?

The order of the dungeons impacts the game considerably, but not much through difficulty. In future posts, I want to continue exploring these influences.  I now have a post analyzing the results about how the Master Sword effects difficulty and a post about what players’ favorite quests are.