Author’s Note: PLEASE DONT FORGET TO READ PART 2 – PREFER COMPOSITION OVER INHERITANCE! – It describes the alternative! It’s what the Gang of Four intended when they made Design Patterns. THIS POST SERIES ISN’T ABOUT OOP BEING BAD – It’s getting you to realize THE TRUE POWER OF OOP – POLYMORPHISM (Interface Inheritance) with COMPOSITION and WHY it’s worth doing instead of subclassing/extending/inheriting.

Inheritance is an Object-Oriented Programming concept near and dear to my heart. Early on I recognized it as a godsend to programmers. Over time, I found myself realizing its destructive nature in my projects. In programs where I began to crave extensibility, I noticed that inheritance started limiting me to due to its tightly coupled nature. In services I had to maintain, I found inheritance hindering readability causing headaches figuring out where functions were defined.

I want everyone to realize that composition should be used instead of implementation inheritance all the time because inheritance creates code that is neither extensible or readable which are the foundational properties of clean code. Composition STILL allows you to utilize POLYMORPHISM – the core extensibility focused feature of OOP. The Strategy Pattern is a good example of this. But, anyway, let’s explore why Implementation Inheritance can often lead to problems for inexperienced programmers.

Inheritance is the concept of an “is-a” relationship. We say “a cat is a mammal” and “a mammal is an Animal.” When we say something is an animal, it means it has the properties of an animal (shares member variables), and it does things that animals do (shares methods).

There are two types of inheritance:

When I first started programming, I saw inheritance as a way to share code between different classes. It was beautiful. You could write functions in a base class, and all of the derived classes would automatically have those functions, reducing redundant code. It took me a long time to understand that implementation inheritance was inherently evil, and we can achieve the benefits of polymorphism without the disadvantages of inheritance by using composition to reduce redundancy.

I’ll walk you through the thought process I took years to understand. Think about the above problems as I go through my learnings.

I used inheritance to create a large hierarchy of classes in a game I was making. Here’s a simple version of the hierarchy: 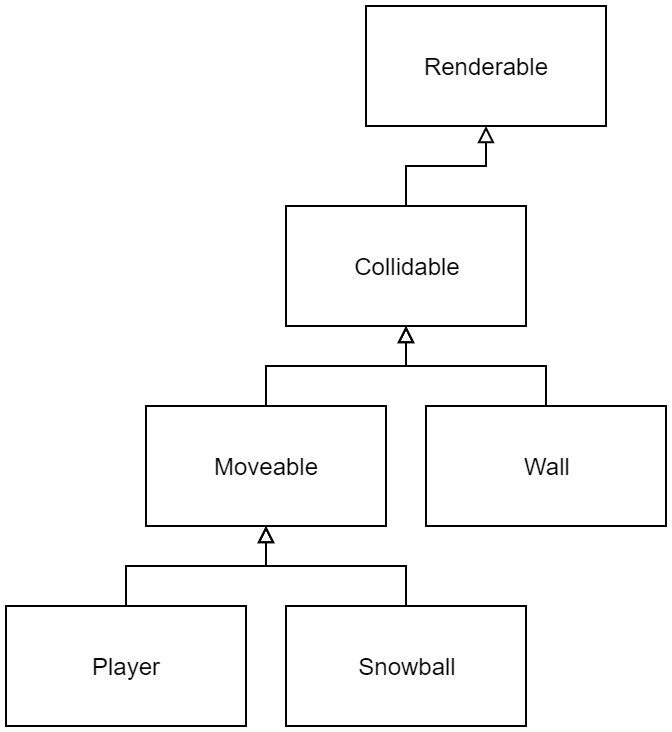 Polymorphic containers of Players and Snowballs would be iterated through to render, handle collision detection, and move every object without needing to know the derived type. You automatically have the methods for rendering, colliding, and moving with no extra lines of code. It seems awesome! Let’s see how bad this really is.

How would you add an InvisibleWall class? What about adding a ParticleEffect that moves but would annoy the player to death if they collided with it?

One way to add these classes could be to create them at the bottom of the hierarchy and override the methods to be blank. For example, make ParticleEffect inherit from Moveable but override the collide() method with an empty body. The problem: now you’re lying. InvisibleWall is-a Renderable, but it doesn’t render. The lie damages the readability of your code because you’ll have to dig into the implementation of the derived classes to understand which objects are doing what. Also, notice how this would add redundancy because you would end up with classes that override the same methods with no-op behavior (InvisibleWall and InvisibleSnowball would both override render with the same behavior). Seems silly because the whole point of using inheritance was to share code 😛 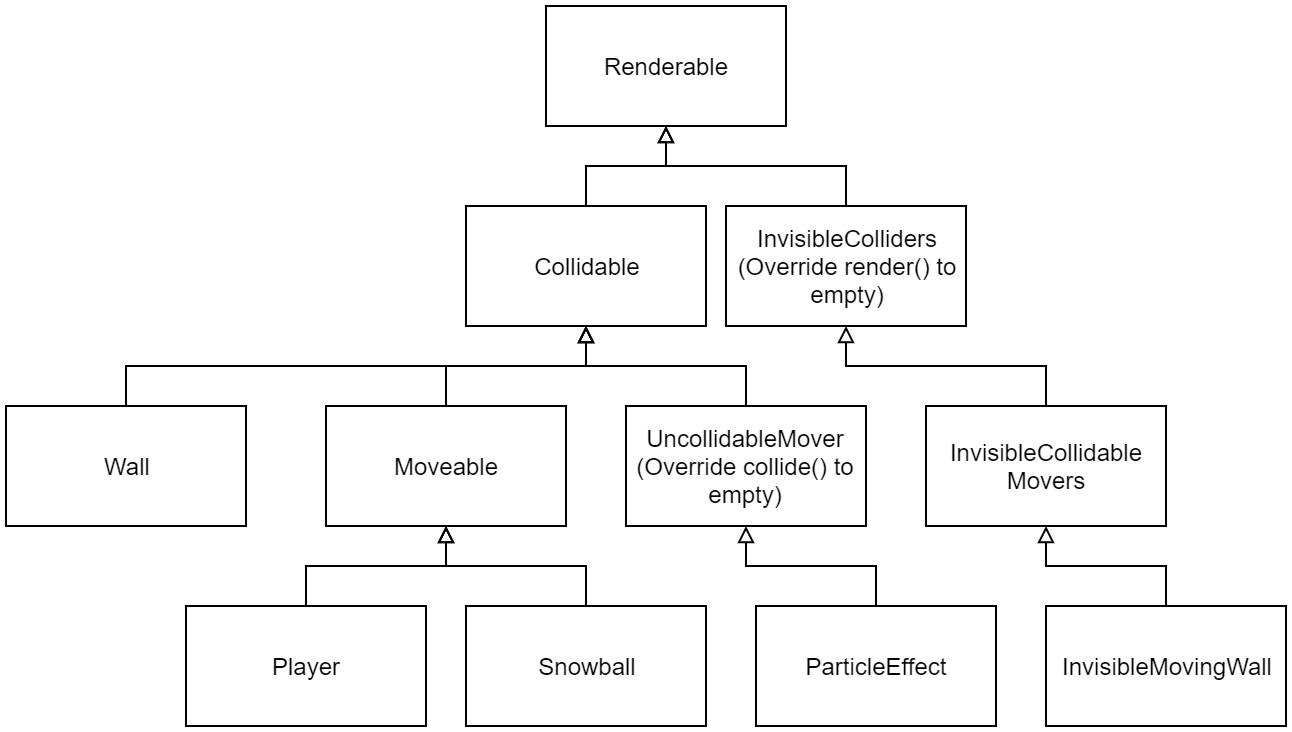 It’s a mess! The core problem that makes hierarchies difficult is how inherently tightly coupled derived classes are to their base classes. In this example, you can’t make a Movable that isn’t a Renderable or a Collidable without lying by overriding their methods. That’s a huge problem. How would we fix this while still using inheritance? Remove the hierarchies!

The Madness of Mix-ins

Now that we understand that hierarchies are a tightly-coupled mess, we can use flat hierarchies to make this better. This is called Mix-ins. The name comes from an ice cream shop that allowed customers to mix and match different “mix-ins” like sprinkles and caramels together. Let’s see our example modified to use Mix-ins:

In this example, the Renderable class still contains the code for rendering, removing redundancy. We get the benefit over hierarchies because Movable, Collidable, and Renderable are no longer coupled to each other.

Still, there’s a huge code smell here. We can notice it when we try to test Snowball or Player and find that we can’t isolate the snowball code from its base classes to test, resulting in redundant tests across classes or just more complicated tests in general.

Again, the problem is the tight coupling between the derived class to the base class. Let’s say in the beginning, Collidable just assumes all objects are rectangles and uses that to calculate collisions. As our physics gets more sophisticated, we find Snowballs shouldn’t really be rectangles. Playtesters think the snowballs look strange when they collide. To fix this, we want to add circular colliders. How could we do this?

What can we do to fix this? Let’s abolish the is-a relationship. Let’s make it so we can pass in different types of collidable components into our classes to make them super flexible.

If you loved this post, you would enjoy reading most of the books I recommend. Check them out!