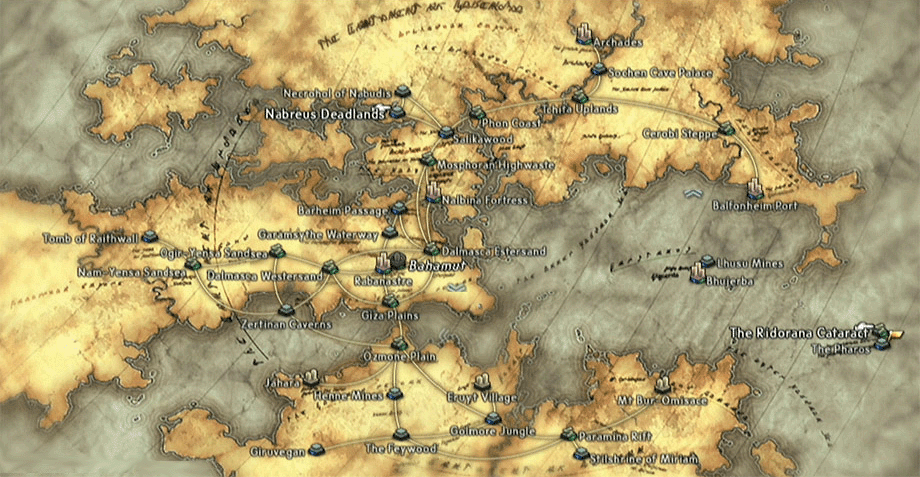 With the remaster, The Zodiac Age, coming out this week, I want to remember some of the things Final Fantasy XII did right. Future JRPGS and WRPGs borrowed some of the revolutionary game design of FFXII, but it doesn’t get as much credit as it deserves (even from me). Judging by more recent Final Fantasies, Square even seems to have forgotten the great decisions they made…

The battle system in FFXII was called ADB. The system is a natural extension of ATB in a more real-time world. Your action bar fills up and you can perform an action when it’s full. Multiple actions can happen at the same time, like in FFX-2, but some actions (due to the limitation of the hardware at the time) must happen alone. I wish that they went further with this battle system in the future, but at least we have the Zodiac Age to re-experience this.

The reasoning for choosing a system like may have been related to FFXI. Perhaps if players who played the single player FFs got used to a more real-time system, they would end up trying FFXI, Square’s biggest money maker. Another theory: they thought that turn based was less popular and wanted to broaden the audience for the series. Players who like WRPGs are going to be more likely to like FFXII than others in the series due to the near real-time combat and open-world nature.

The genius of ADB system allows players to turn the battle system to wait-mode and experience a fully turn-based battle system where they can have complete control over every character. While I feel this would make the game too slow, it’s a great feature to have for people who want to experience the game this way, which may be a lot due to the nature of the series before this.

The Power of Gambits

Moving to a real-time system meant you can’t control every party member anymore. Square thought of the Gambit system to enable players to control AI precisely. Gambits are essentially programs that control what your party members do based on certain conditions. “If an Ally’s health is too low, heal them.” Honestly, it’s a genius system that more real-time party-based RPGs need to implement.

Some people say, “Gambits make the game play itself.” That’s one way to look at it. In reality, though, it’s not the game playing itself; rather, your decisions instructed the game to play itself. It’s a very empowering feature. If you set up your gambits correctly, you don’t need to do anything, you can just watch it unfold.

This doesn’t prevent you from feeling bored if you use Gambits, however. In the end, during the heat of the moment, the player ends up making fewer decisions, even if it would’ve been repetitive decisions anyway. I’m hoping the fast forward button in the Zodiac Age will help people feel the rewards of using gambits. If your gambits are great, you’ll be able to fast-forward more because you won’t have to worry about battles going awry.

Another way to help mitigate the complaint of boredom from Gambits could be to reduce the number of “trash mobs” – enemies that are easy to kill – and replace them with fewer, more thought-provoking encounters. At this point, you may need to change your Gambits in between or during battles, which could be helped by having a system where you can easily switch between Gambit strategies. This naturally leads to a system like paradigms in FFXIII, in which changing paradigms mid-battle became the core interesting decision in battle.

As a small side note: FFXIII could’ve benefited from Gambits. FFXIII forgot that people wanted to have precise control over all party members. The roles in FFXIII exist to be classes of AI that you need to trust to do the right thing, but they often don’t do what you want them to do. Auto-battle in FFXIII is often criticized because it takes decisions away from the player. Gambits would’ve allowed players to make more decisions that would impact the game, which people really longed for in FFXIII.

From the early stages of the game, you can go to surprisingly far destinations. One of my favorite memories of FFXII is going out of my way early in the game to try to collect the Zodiac Spear from a dungeon that is extremely hard to survive in. It’s amazing that you are given the opportunity to do this. This is a good decision because new players aren’t likely to take advantage of it, so having the strongest weapon in the game won’t impact them, but experienced players have the ability to go out of their way to see what is possible to accomplish and be rewarded for it.

Compared to most Final Fantasies, there are far more side quests at all points in the game. Most of the challenge in the game comes from the Marks in the game, optional bosses you can hunt down. Those who go out of their way to do these are going to be rewarded with fun battles and items.

The side quests aren’t just gameplay based, but they really help flesh out the setting with small tidbits. The more optional content you do, the more you begin to understand how the people in the world live. The people you meet make the world feel alive. One simple example, in Archadia you can meet a soldier that wants you to defeat a monster that is threatening the city. He talks about how his boss wouldn’t allow him to go defeat it. So, he’s spending a lot of his personal money to make the city a safer place. This helps the player realize that not all people in the empire are evil.

It’s thrilling to explore the great parts for FFXII right before The Zodiac Age comes out. I’m very excited to be able to explore these great gameplay mechanics in closer detail now that I’m older. I look forward to having my memory refreshed, so I can more deeply analyze some of these systems.