Survey Results: How the Master Sword impacts difficulty in Breath of the Wild

In Zelda Breath of the Wild, ever wonder when players get the Master Sword? What about how the Master Sword impacts difficulty of the game? A couple weeks ago, I posted a survey on the Zelda subreddit. I posted results related to dungeon order and difficulty here. Since then, I’ve had time to analyze the data further.

The following is based on 428 responses. 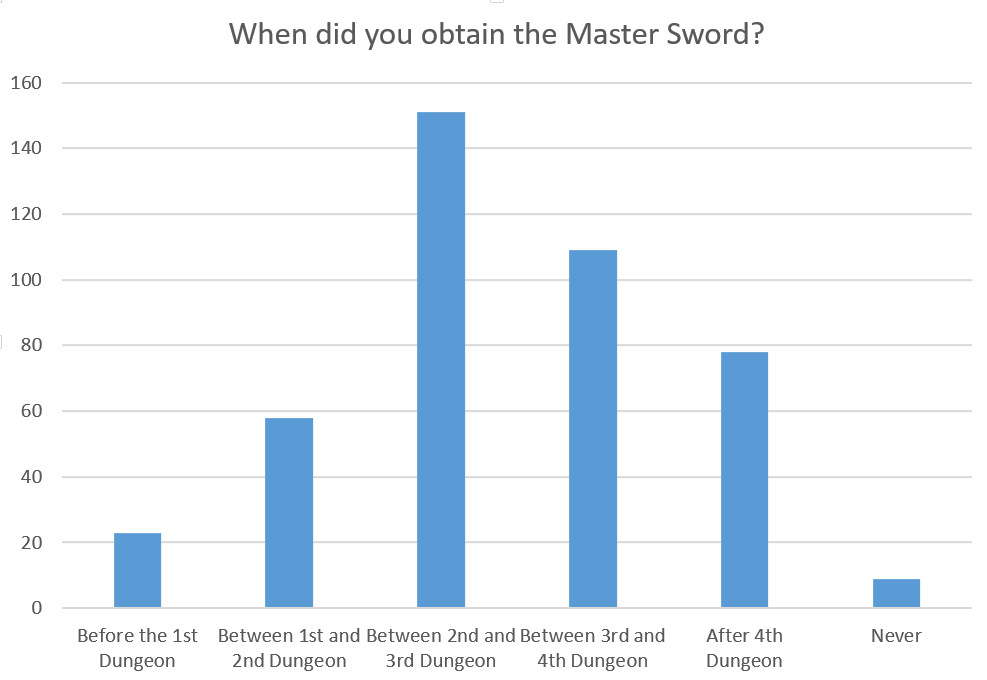 (Note: the questions related to difficulty allowed the users to rate them on a 1-5 scale: 1 = Too Easy, Easy, Just Right, Hard, Too Hard = 5. The scale in the following graphs represents the average of this score.)

The Master Sword is definitely one of the best weapons in the game. It’s also the only weapon that is a source of semi-permanent progression. Let’s see how players with the Master Sword find the difficulty of a boss compared to players without the sword.

You’ll probably notice from this graph the obvious realization, players that already had the Master Sword for a boss tended to find it easier than those without it. Unfortunately, there are a too few players in some groups (specifically, those who got it before the first and never), so that can skew the data a little bit from small sample size.

Let’s look at another metric using by grouping players differently. In the following graph, I’ve split players into two groups: those who have the Master Sword before the second dungeon and those who didn’t. Instead of looking at boss difficulty, let’s look at dungeon difficulty. 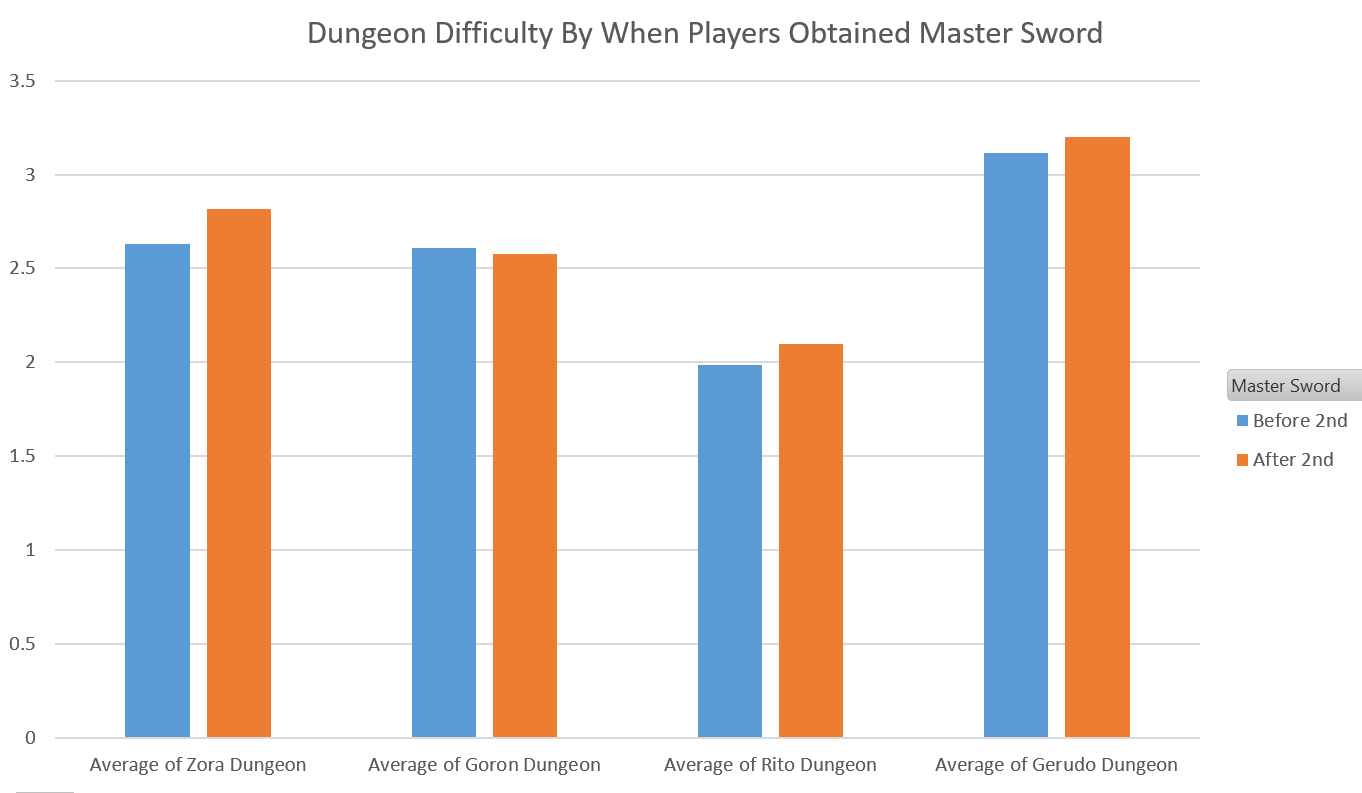 The Master Sword as a Heuristic of a Skilled Player

The Master Sword is a strength itself, but we can also think of it as a heuristic that the player is more “skilled”. They’ve had at least 13 hearts at one point, and probably still have at least 13 hearts. In order to get this many hearts, they probably played the game for a longer amount of time, giving them more time to learn the mechanics of the game, making them more skilled. This contributes to them doing better than players without the Master Sword. This is why in the graph above, players who get the Master Sword early will tend to find dungeon easier. They’ve had more time to understand how puzzles in this game work and become skilled at them. Once we realize this, it leads to some interesting observations. 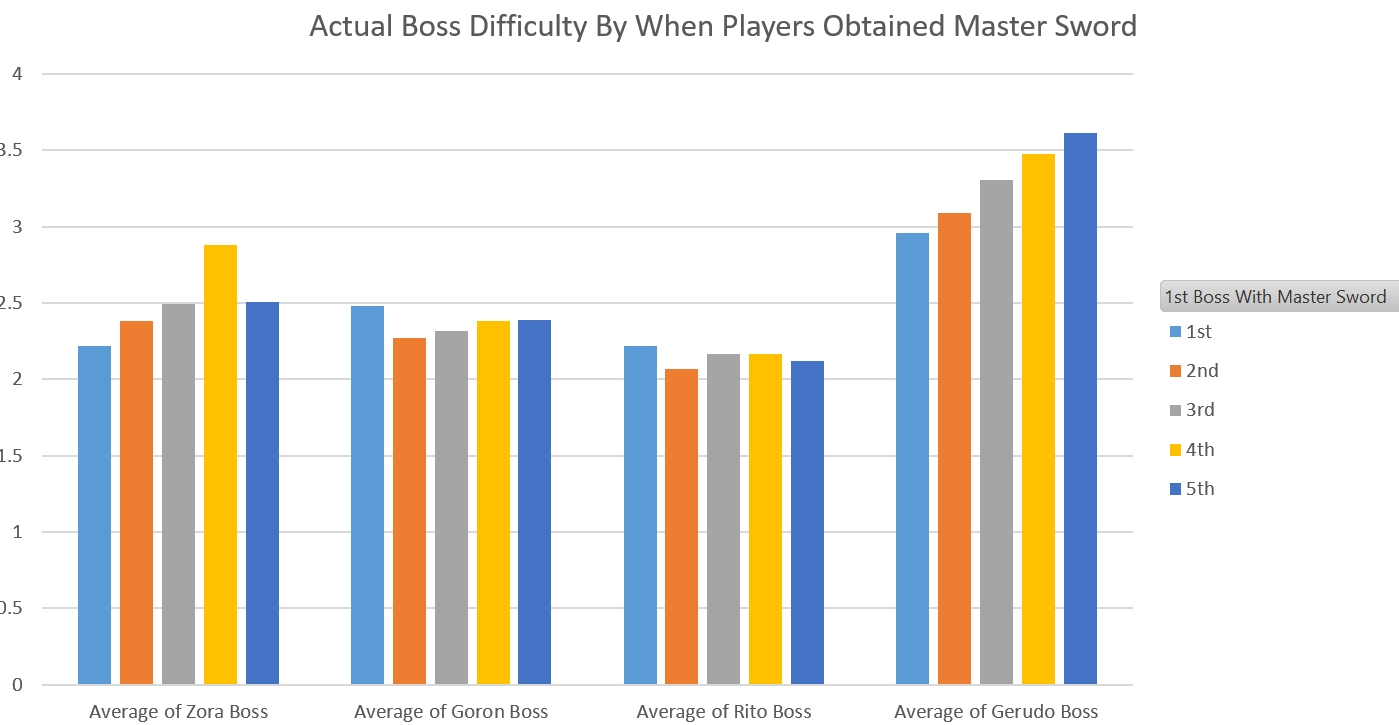 In this graph, we are looking at each boss by grouping the players by how early they received the Master Sword. You’ll notice that especially the Gerudo boss, but also the Zora and Goron boss, follow a trend. The earlier the player obtained the Master Sword, the less difficult they found the boss. So, It’s not just having the sword or not. It’s more related to the heuristic of how skilled the player must be based on when they obtain the Master Sword. The Gerudo boss is the most difficult which is probably why this effect is so pronounced for that boss. The Rito boss is naturally the easiest, so skill doesn’t matter as much, everyone was able to see it as an easy boss.

Here is the boss difficulty split into the two groups, which now we can think of as more skilled or less skilled:

Players who get the sword earlier have several advantages in the game: 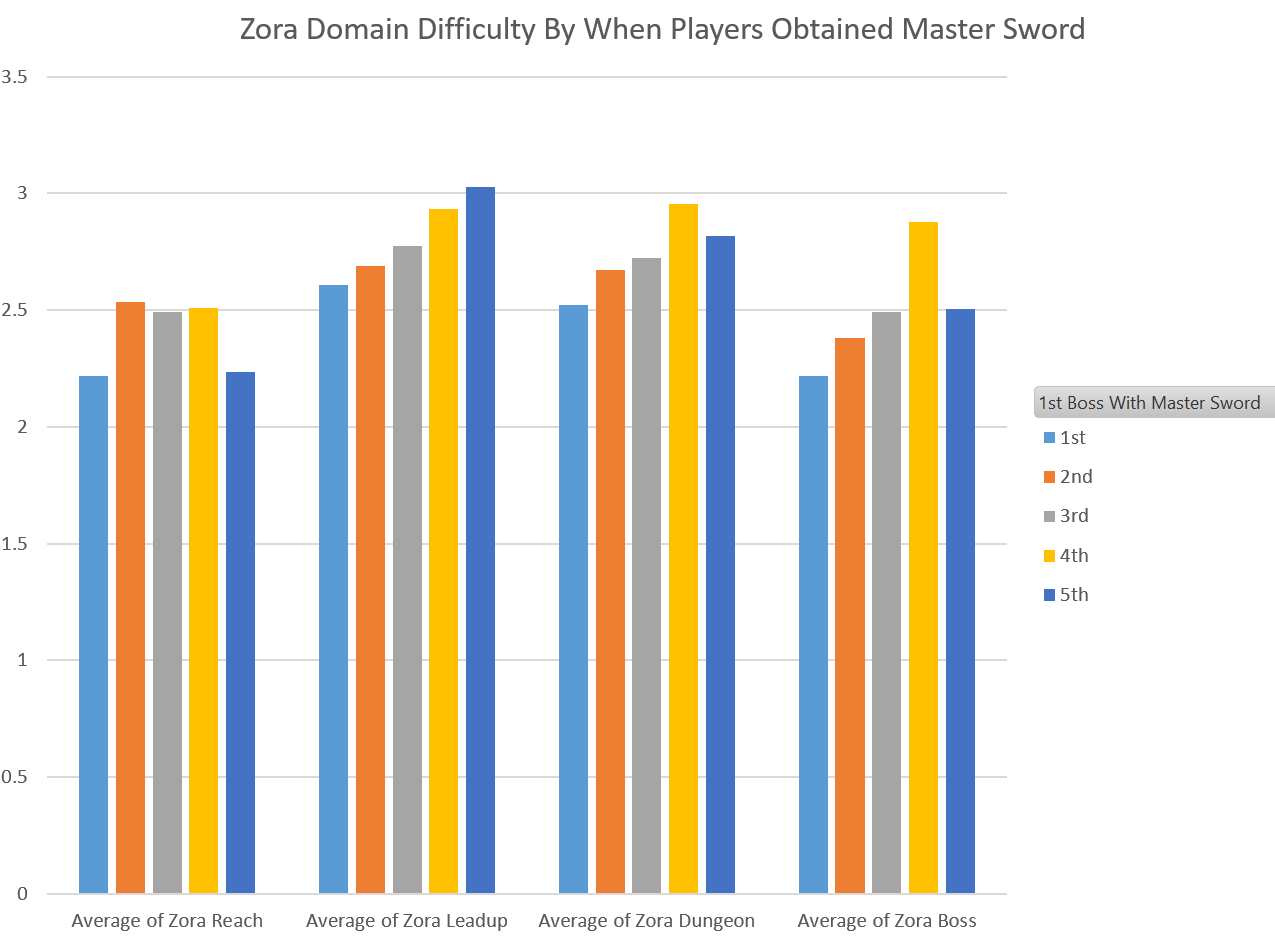 Notice how, in general, there’s a correlation of how early the Master Sword is obtained to how easy they find various parts of this quest, not just combat. If players are going to get the Master Sword earlier, that’s a good sign that they’ve already made significant progress on side quests. This gives them more experience in the game, thus making dungeons and field sections feel easier as well.

People tended to find the castle more difficult than Ganon himself. This may be because they had to go to the castle earlier in the game to get the memory if they wanted. I personally found that the last time I went through the castle it was pretty easy, while the first time was hard and entertaining.

If we look at how this was distributed based on how skilled a player is using the Master Sword as a heuristic of skill: 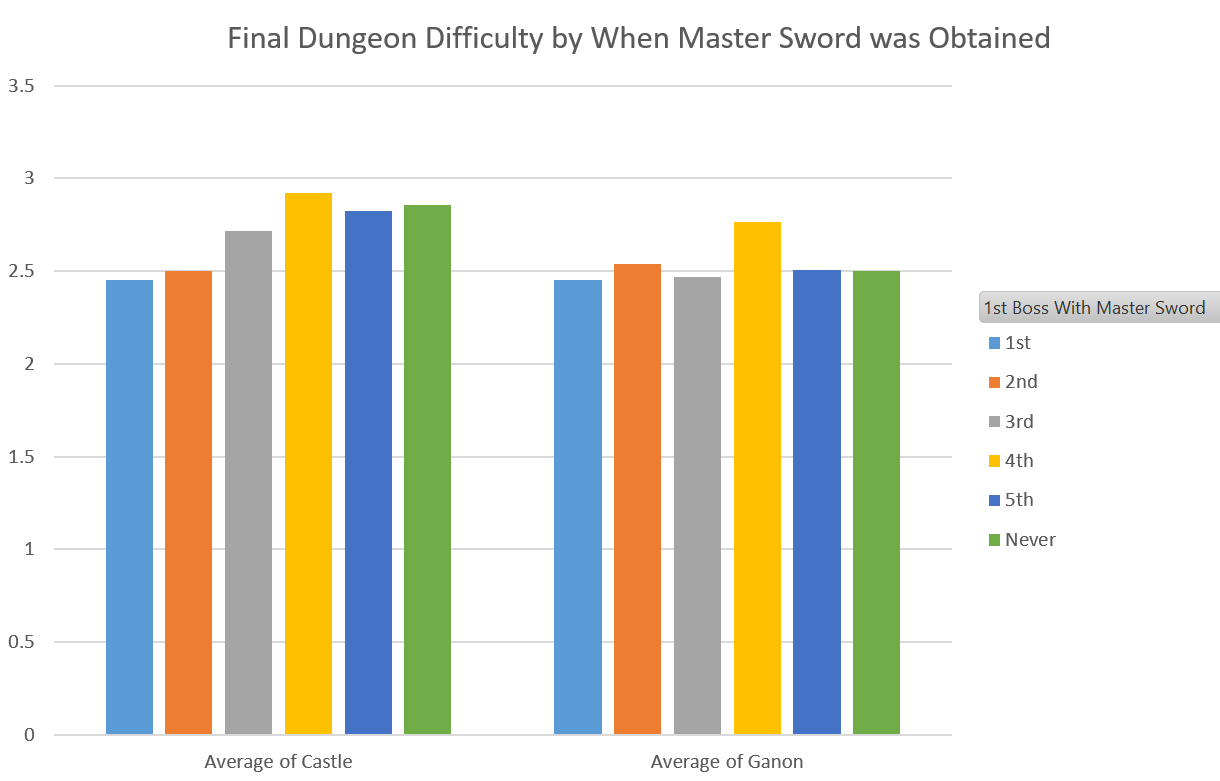 The castle follows the difficulty trend I would expect based on how early they got the Master Sword. More skilled players find it easier.

Ganon doesn’t follow this trend, however. I would suspect this is based on how the game manages difficulty, in general. People have been saving up weapons now is their final chance to use them, so they might as well. Same thing with any food they have on them. We know that eating makes the game easier, and because there’s no reason to save the food anymore, they should just use it. These give players who have less experience and skill in the game a way to make the game feel easier.

In my next analysis of the survey results, I’ll be looking at which quests are the most enjoyable. Since the Master Sword seems to impact difficulty, I’m wondering if getting the Master Sword early will make players enjoy the game less.