Kingdom Hearts 2 has a rather odd MP System. It’s often criticized but also loved by others. Let’s talk about how it works, what’s not great about it, why it’s awesome, and how it could be made better in Kingdom Hearts 3.

Here’s how it works:

What’s not great about it?

What’s awesome about it? 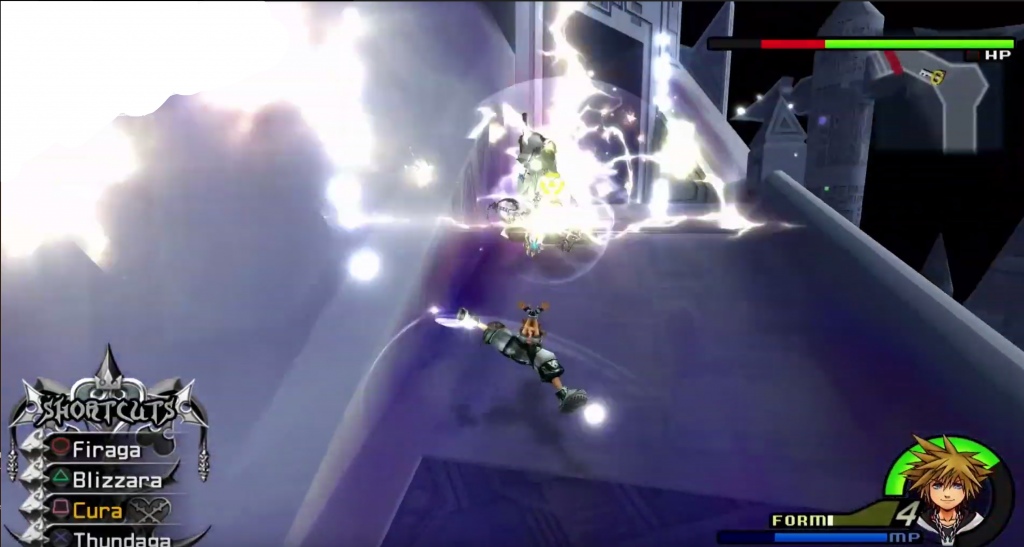 Here’s the thing though: the MP System helps add several interesting decisions and challenge layering throughout the game.

Why did they make the MP System like this in the first place? It prevents people from spamming Cure. In KH1, there was a first-order optimal strategy to Attack/Cure. Attacking would refill MP so you could Cure almost anytime you needed to. The devs wanted a way around this strategy.

In Kingdom Hearts 2, if you cast Cure, you have to wait some time before being able to do it again. This really makes you think more critically about when you should use it and requires you to play more cautiously afterward, but only for a set amount of time. It also prevents you from spamming Limits without adding an extra bar to keep track of.

It also enables you to cast other magic abilities before deciding to use cure or limits. In a traditional MP system, you might save your MP for only healing opportunities. Some players in KH2 are more likely to use magic in anticipation of not wanting to waste all their MP. They might say: “Oh I need to cure, but let me use some magic first so I don’t waste all my MP.” This thought makes them play riskier and play around with magic they might normally use. They can still choose to use Cure now if they don’t think it’s worth the risk in the moment, so it’s a small example of challenge layering.

Drive Boost causes the Drive Gauge to sparkle when MP is recharging.

Drive Boost is an ability Sora learns that increases drive recovery gained from enemies while MP is recharging. Drive boost a clever example of a mechanic that promotes interesting decisions and challenge layering by providing an optional goal that players have in any battle. Here are the benefits:

Personally, I found myself deciding to drain my MP, either by using magic or just curing, then attacking. I died sometimes, but it was fun because I wasn’t just mindlessly grinding. I had layers of goals: Main goal: Level up drive form. -> Go into drive form. -> Gain drive as quickly as possible. -> Deplete MP and attack.

What could make it better?

KH Birth By Sleep switched to using a command deck which fixes a lot of the problems while maintaining advantages. Cure doesn’t inhibit any other abilities because each command has its own refill timer, plus the player can choose how defensively they want to play by deciding how many cures they want to equip at once. KH 0.2 A Fragmentary Passage also expanded on the system which gives us a sneak peek to Kingdom Hearts 3.

Kingdom Hearts 2’s MP System has some flaws but overall it’s great at providing players with interesting decisions and challenge layering in the heat of battle. Here’s hoping Kingdom Hearts 3 expands on this wonderful system!